While goldfinches feast upon sunflowers and nuthatches nip away at the suet, we have picked our way through all the squash, tomatoes and peppers, laying most to rest and ripen in garages and windows. 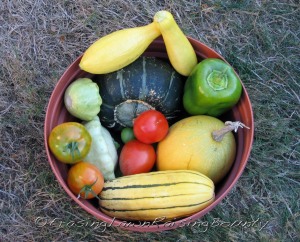 My lone cricket still eeks out his chirps most evenings, letting me know that all the frost warnings are not quite for real…..just yet.  The predicted heavy rainstorms never materialized in our area, only a couple of short-lived squalls one day.  But, it’s so much easier to do cleanup when it’s a lovely, dry autumn afternoon.

The kale, lettuce, chard, and leeks are very happy with the current phase of mild part sun, part cloudy days, alternating with rain, and the nasturtiums that refused to grow all summer have never looked so lush……. 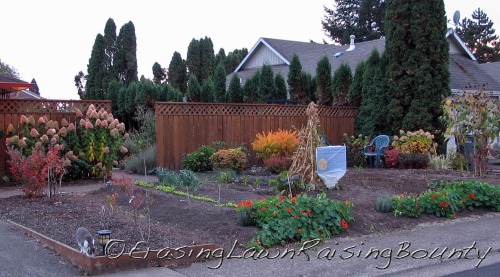 But, it’s not over yet!  It’s not THE final harvest……we’re just getting growing on the fall crops….check back in!

Just because we harvested all the basil the evening before a cold rain was supposed to dowse us, the storm skirted north, depositing its brief, but heavy showers while I was slipping the last plants.  I wasn’t going to take the chance of seeing our beautiful plants become black-spotted before harvest!

Instead, dry, but cooler weather has prevailed, allowing the summer squash to keep pushing out more small “gourmet size” fruits, while several yellow bell peppers have actually yielded a couple of large, still-green specimens.  (Perhaps they felt it necessary to prove themselves after finding themselves mentioned in a “comedy of errors” mode.)  Tomatoes are in absolute limbo with the lower sun angle and night temperatures hovering in the low to high 30’s.  They have earned the right to wear evening jackets! 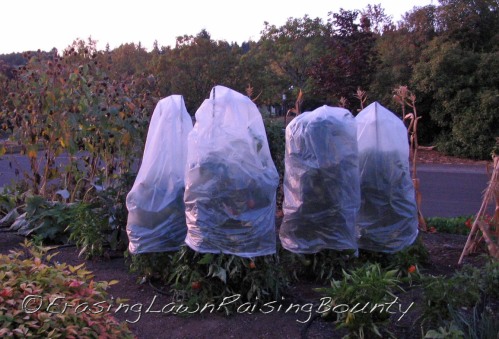 Classy evening jackets for the tomatoes

Happy to report that the lettuce seedlings that had nearly been chomped to death before evacuation of the kale and chard, have pulled through and are starting to put on a little girth.  And, some rainbow chard seeded in July, largely sheltered by green beans and squash has grown up nicely, almost ready for picking.

Lo and behold, I came upon another “double-take” today while scouting about the patty-pan/saucer squash; that makes four pairs of fused veggies this season! 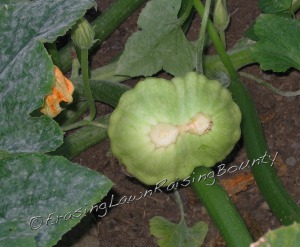 We’ve been warned about a rapid arctic front moving in just ahead of autumn rains setting in, and the weather guy’s last-minute prediction of 28° had two of us running out before dusk to clip off all the tomatoes.  It felt too warm to believe it could fall that low, but we weren’t going to get up at 4:00 am. to find out.  As it turned out, it only went down to the crisp 30’s again, but we’re further along in preparation for the temperature dive now postponed for a couple of days.

The September pickings are in, just as weather decides it will actually be fall-like!

Thank you plants, pollinators, and devas!