Almost to the hour, a long-needed dose of rain started to fall as we officially entered the fall equinox.

Our seemingly extended summer outdid itself in record-setting days near 90ºF for weeks on end, especially since the last post.  Any hints of rain or moisture seemed to vanish into some other reality, or released more as vapor than solid precipitation.  Watering became a daily need until after Labor Day, when the sun angle was lower and there were noticeably fewer daylight hours.

Blessed with three days of substantial rain, delivered mainly during the nights, with a couple of strong squalls during the day, we are now enjoying some beautifully mild temperatures.  As I write the sun is getting low on the horizon and there are many tiny insects buzzing, whirling, and floating in the bright light, also highlighting the many gossamer strands of cobwebs.  And there are about ten raindrops glistening as they fall from the stray cloud that is just passing overhead.

It smells heavenly, and myriad plants are looking more relaxed.  A bit of a paradox for some of them, as the change in season also diminishes their stimulus to grow indefinitely.  Most of the squashes have succumbed to the familiar mildew, yet a couple of them keep pushing out some new growth, making the plants look rather hilarious.  The tomatoes are following suit, and most have already been harvested.

Relief on the way with fall rain. Tomatoes and squash are succumbing to the change in season, while the nasturtiums have come back onto full glory.

Things were looking pretty good for awhile for a new crop of green beans and a succulent row of lettuce….until last weekend, when the Bambies found their way into the garden again, and munched down the bean plants plus a few tender tomato sprouts.  The beans themselves are looking a little bigger, so there may be some for picking, but somewhere in the last 2 days they returned and munched down the baby lettuces, so there is fall’s crop gone.  At least they don’t like beets or basil 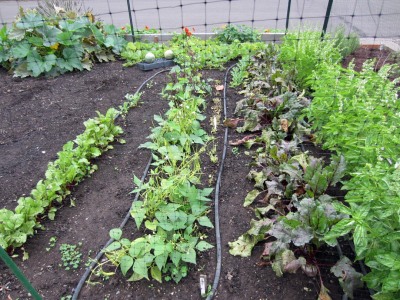 Hoping others are having a bountiful harvest! it’s time to make some pesto before the basil declines with wet and cooler weather!