Winter (for Western Oregon) showed up in brief spurts in mid-December, in January, and seemed fairly negligible in February, leaving many of us wondering what is in store.  Many of us love the sunnier and unusually warm days that have presented themselves, but it does not bode well for water availability in summer, since there is essentially no snowpack in the mountains right now. 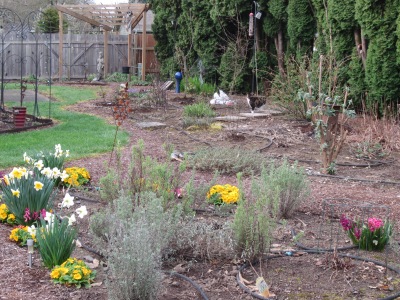 Spring arrived early, like mid-February. Usually not this many plants showing so much growth, and March required a lot of pruning!

February now goes down in the weather records as the driest and warmest month Oregon has ever experienced.  We welcome the next episode or rain scheduled for tomorrow, to give us allergy sufferers some brief respite.  The air itself looks a bit brown, which is really unheard of in February and March.  Undoubtedly, we are very grateful not to endure the harsh weather patterns in the eastern states, yet it all seems a bit surreal.  To spend the last half of February in warmer Costa Rica (which had its own atypical weather patterns happening), then return home to find I needed to start pruning everything, was a bit of a time warp.

Checking in with a local beekeeper a week or so ago, he wasn’t too happy about the weather, although there are plenty of blossoms out for the active bees.  Nights are still very cold, and he is concerned about any potential cold snap over the next 2 months that would kill many bees because their physiology has changed to warm weather activity, after which they don’t adapt quickly/well to sudden temperature changes.  And bees are a precious commodity anywhere, so we’ll have faith that this will be fine.  My Spanish lavender plants have overwintered better than last year, but having a sudden, brief deep freeze in mid-December, just after a warm fall, really tests their limits.

Wandering around in shorts and sandals for a couple of hours the past weekend I marveled at the warmth.  By February we knew everything would probably bud early, if no cold weather arrived, since some of us noticed daffodils and tulips pushing out of the soil in late December. There is nothing to stop a brief winter blast from hitting us anytime into April, of course, and that could present some issues, both for plants and for bees.

Some gardeners are getting their veggie beds ready for planting the early lettuce, spinach, etc., but my brains aren’t there yet, since we tend to enjoy warmer weather produce.  Also, it’s one thing at a time, and right now that thing is more pruning, and feeding blueberries, kiwis, strawberries, roses, and such.  That will be a few evenings and weekends of time.

Today, March finishes with more typical weather, just in time for the fickle month of April.  An imminent thunderstorm and a cold front of rain moving through right now; almost fifteen degrees cooler than yesterday!  And rainbows brightening the clouds when least expecting it.

Bees, get back to your hives!  Spring has sprung… 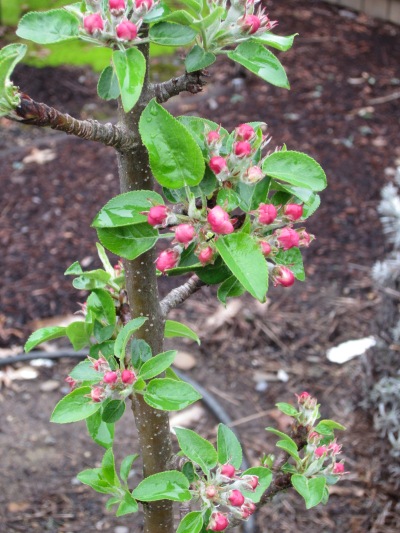