April….spring….is always shifty in relation to weather, but this year feels less normal “than normal”.  This isn’t surprising to some of us who can feel the invisible shift in planetary energetics.  Strong fluctuations of Earth’s geomagnetic fields, episodes of solar winds, coinciding with increased tectonic activity around the world, just might influence weather patterns and people’s energy, though we won’t hear of it via traditional technology or the media.

Slowly but surely there is growth. The large overwintering kale doesn't count....

April has taken forever to get through; it seems like eons ago that we put in our first cool-crops in the CG.  Happily, they germinated well despite heavy rains just after seeding.  They have survived several episodes of hail, heavy rain and wind storms, frost, and “much lower than average” temperatures for the month.  We could call it….Apruary.  Somehow February and April got mixed up. But the sporadic days of sun between storms have brought us snippets of warmth, enough for the plants to show some substance, so initial thinnings were just made.  Love those tasty kale, lettuce, spinach, and pea sprouts! I decided to try potatoes again this year, so planted them last week.  I’ll keep my fingers crossed for a decent crop.  I think I heard something about a warming trend in early May.  Yes! Please, oh please.

Aspen beginning his tentative first outdoor explorations: his motto seems to be "always safer to hunker down and watch". 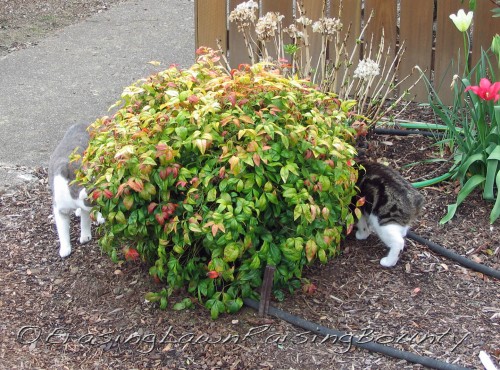 So, what is the current bumper crop? Weeds!