The July jungle is now in full swing!  Evidently our watering regime is working well despite an ongoing drought, and waves of very hot days replaced by cooler, more “normal” temperatures, with heat spikes in between.  We simply use soaker hoses for 10 to 15 minutes daily on everything but the tomatoes, which may be on an every other day schedule, temperature dependent. 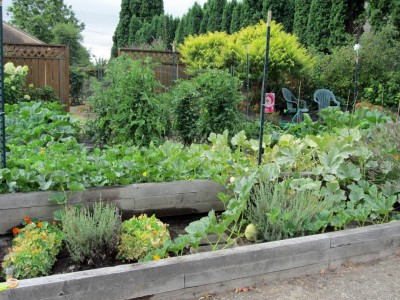 The time when the plants just weave their bounty together; criss-crossing paths.

The bounty is coming in! Mostly summer squash and the oldest planting of bush beans, with a few extra pounds making their their way to a local food bank. The winter squash are prolific, too, just not ready!  And while scouting around the squash some mini-canteloupes and margarita melons showed themselves!  Always such a thrill to find the hidden gems!  Thinning the prolilfic tomato vegetation is allowing the tomatoes to see the sun and a few are just blushing. 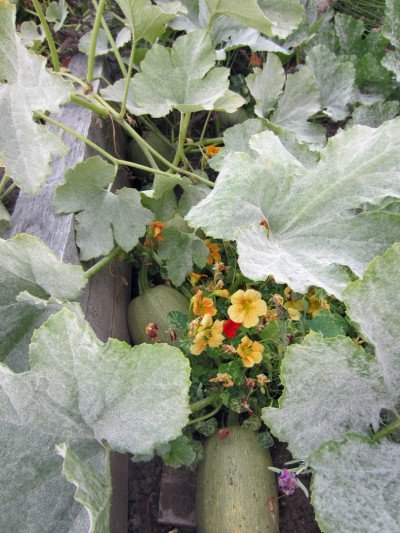 Four spaghetti squash tucked away; and yes, the powdery mildew has started. Earlier than usual this year, corresponding to the earlier maturity.

This year has seen a return of the twin (fused) yellow squash; this is the third set in 3 weeks!

The dilemma of outwitting our browsing buck continues.  Almost a game in a way; one week we are “safe” from damage, and the next week he lets us know he is smarter, or more desperate, probably both!  While we now have extra netting stretched over plants within the already-netted perimeter, our nemesis continues to jump in and scout around, browsing anything that might poke through the netting.  Damage control is tolerable under the usual circumstances, but now he has earned the reputation of  being “bad, bad, bad, really bad” by succeeding in wiping out the beans that had just recuperated from a setback 2 weeks ago.  Apparently this was achieved by literally walking on the netting!  Maybe I should start tally marks on an extra zucchini.  Deer wins this week’s round.

Ambushed! Now the deer doesn’t mind walking on netting to reach his treats!

One response to “Step carefully…”