Fall…arrived in lightning speed, so it seemed; preceded by a few cooler days of decent rain to relieve some of the stress of excessive smoke and thirsty trees all over the region, both urban and forest. The precious rain was a bit precocious in actually arriving as anticipated; taking itself further north for a few days, but it did finally arrive in time to help with the forest wildfires and start cleaning out the smoky air that kept recycling itself over the state.

The smokey skies, hot temperatures, and strange humidity initiated a very early onset of powdery mildew, ensuring the end-of-squash-and-melons in a very abrupt manner. With the return of some sun and a bit more warmth, the nasturtiums, lettuce, and kale are more vigorous, however. As the first rains arrived it was a dash to clip melons, spaghetti, and delicata squash from their deteriorating vines, and gather in any ripe tomatoes. 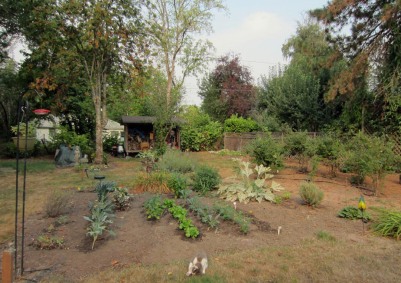 Winding down those squash, winding up the greens. Where’s Juni? 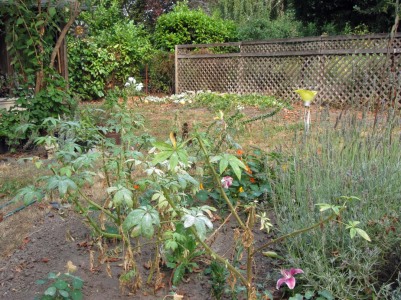 A first-year learning experience in a new garden; it was very productive in most ways, and less than anticipated in other ways, seemingly more related to sun and shade patterns than anything else. A few ideas are now being tucked away for reference for next year.

In some ways this “new” garden seemed easier to care for, compared to the former one, with seemingly less watering needed, although the overall bounty was a bit less. Whereas the high amount of loam in the old community garden was well drained and easy to dig, more clay in the present yard helped retain moisture longer, even if it made the ground a bit harder to work to start with. And, more shade trees overhang this yard, keeping the area a bit cooler.

Tomatoes were later producers here, in spite of being next to the house, which is turning out to be an asset as we cool down. What wasn’t foreseen was the amount of shade they would be in until the sun shown on them (after 12:30pm), and then for the remainder of the day. And they weren’t particularly early-ripening varieties, but now they’re doing well, with some extra plastic over them as the temperatures cool down. Maybe a different spot next year, or else an early ripener.

Enjoying the current 2-3 days of warmth before we see a longer stretch of rain settle in. That delightful flip-flop transition of early fall.

Hoping your bounty has been generous this year!